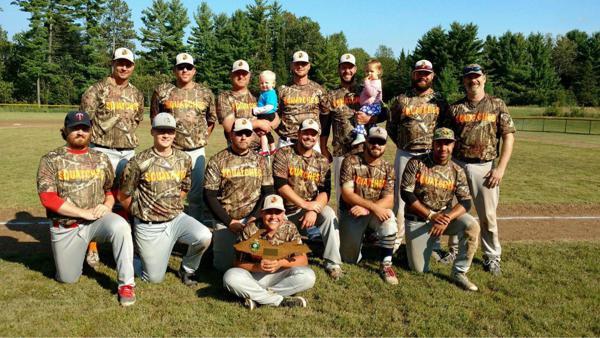 FELCH — The Fox Cities Squatches won their sixth championship in seven years at the 47th annual UP Hardball Labor Day Tournament with a three-run walkoff home run by Brian Henschle.

Henschle’s blast with two outs to straightaway right field gave the Squatches an 8-5 win over Team 906.

“We lived and died on the home run ball,” Fox Cities player-manager Kevin Kangas said. “That’s a credit to our guys, they’re older and experienced. They know they’re never out of the game.”

For the second consecutive year, Team 906 fell in the championship game with a lead in the final inning lost on a walk-off hit. Last year, Langsdorf pulled out the win after entering the final inning down 6-3.

The tournament schedule was dramatically altered by torrential rains on Saturday, leaving enough water on third base for a bobber and aluminum can to float and drift about. Four games were held Sunday with three on Monday.

Team 906 manager Willie Fontana said the loss Monday was another disappointing chapter in the team’s quest for a title.

“We thought we were going into extra innings if we get that one more out,” Fontana said. “The guy who came in relief had a save in the first game. We felt confident. Ryan (Boettcher) pitches hard out here and he deserved a better fate, no doubt.”

The walk-off home run was no stranger to the Squatches in the championship game — Fox Cities won all of its games on walkoff home runs throughout the weekend.

The Squatches entered the final inning down 5-4.

A sacrifice fly scored a run before Henschle stepped up to bat.

Neither team advanced runners to third base until the fourth inning. Then again, with Luke Watson’s fastball hissing to the glove at about 90 miles per hour, it was easy to see why Team 906 often either swung late or was caught on their front foot by a looping curve or a darting slider.

“Luke threw the ball great today for us,” Kangas said. “He comes out, throws strikes and gets guys out. That’s why we wanted him on the mound today. He can throw all four pitches for strikes – fastball, curveball, slider and changeup.”

Fontana said Watson’s performance stifled his team, but knowing he was a talented pitcher, the gameplan was to run his pitch count high enough to get him off the mound early and mount an offense.

“There’s no room for any type of errors for one thing. We played pretty dang good baseball, but there’s a couple things we could’ve tweaked here and there. They had a touch pitcher who could throw about 90,” he said. “We were able to hang around long enough to get him out of the game. You got to tip your caps off to our guys for waiting him out, taking long counts. He pitched a couple innings earlier in the tournament. We tried getting him tired in the fifth or sixth inning and that’s what we did.”

Team 906 had a flair for the dramatic itself with a three-run seventh to tie and retake the lead. They grabbed a 2-0 lead in the fourth inning. Team 906 scored a pair of runs on a wild pitch while a ball hit off shortstop Justin Hyllock’s glove and the throw came too late, scoring the go-ahead run.

Fontana said he expected the Squatches to make a push in the bottom of the inning.

“Tied it up, took the lead, just couldn’t hold it. These teams are too good here,”Fontana said. “It’s tough to get out on any of these guys here. The Squatches are perennial favorites, I would say. They’re that good.”

Fontana said the condensed schedule from the rain affected his team’s pitching plans.

“It did because it effects your pitching playing like that,” Fontana said. “You like to play a game and just get the jitters out a little bit. Everybody was on the same playing field and was doing the same thing. I’ve got a young squad. They’re good. We’ll be back next year.” 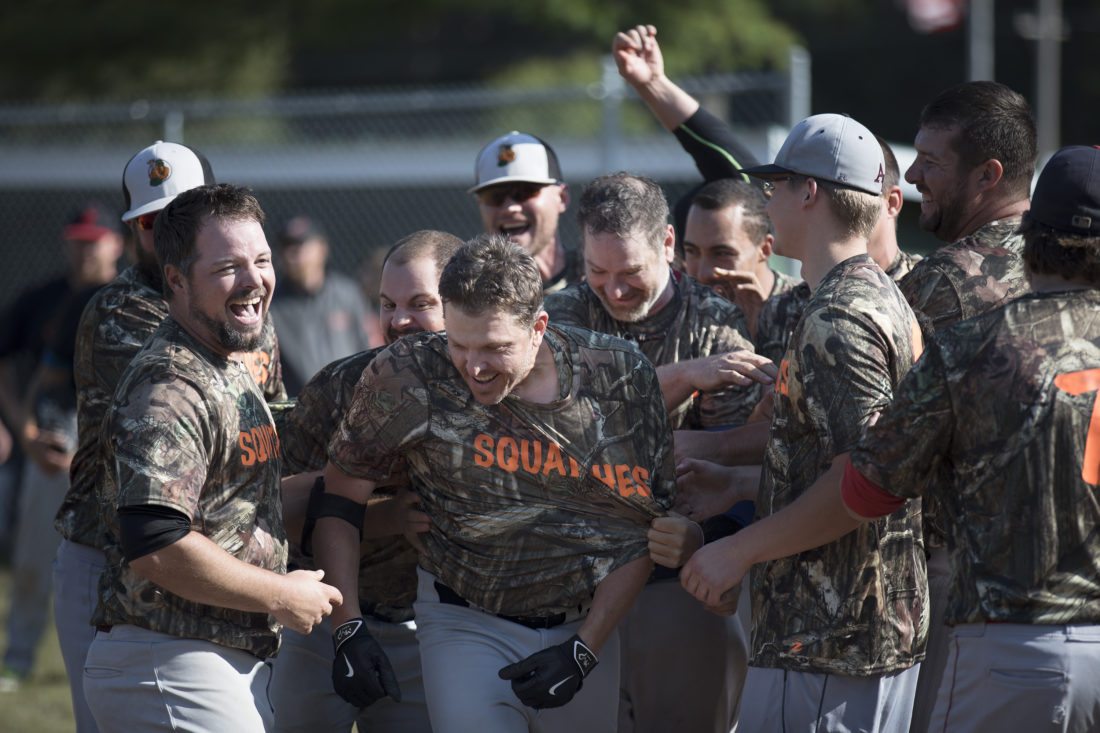