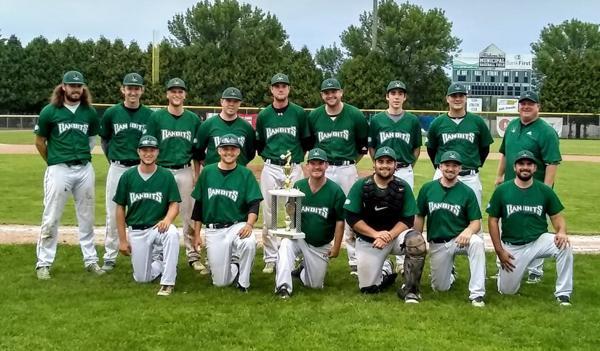 On Monday, September 9, the Shoreland League convened to select its 2019 award winners.

The Manitowoc Bandits were awarded the Grand Championship by winning both the Regular Season and Playoffs. The Bandits finished the Shoreland Regular Season with a record of 10-2 and were 20-13 overall in 2019. They defeated the Green Bay Storm in three games in the Semi-Finals series and then swept the Algoma 'Guins to win the Championship series. Manitowoc earned plenty of individual accolades as well having players take home the Batting Title and Pitching Championship and with 6 individuals named to the All Shoreland Team.

Tom Sawyer of the Algoma 'Guins was named the league's Most Valuable Player. Sawyer had a batting average of .390 for the year with 11 RBI's. His three home runs were tied for the league lead and .732 slugging percentage was the league's second best.

In back-to-back years, the Manitowoc Bandit's Luke Mandich was voted the Pitcher of the Year in the Shoreland League. He finished 2019 with a 3.43 ERA and a 4-1 record, tying for the league lead in wins. Over 39 1/3 innings he struck out 43 batters, which was the most strikeouts in the league.

With an incredible .500 batting average, Chris Casper won the Batting Title. Manitowoc's lefty slugger had a league leading 22 hits in 44 at bats.

Listed below is the 2019 All Shoreland Team as voted on by team managers: