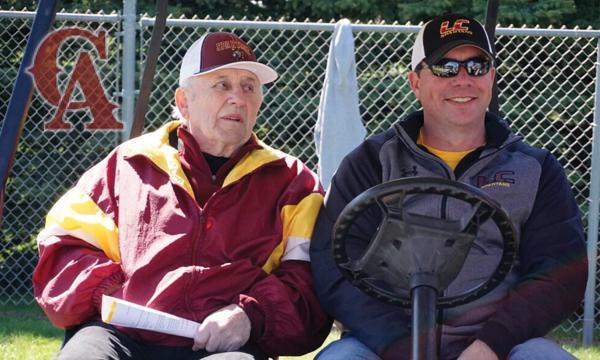 In early 2020, the Shoreland Baseball League elected two individuals as the seventh and eighth members of the league's Hall of Fame. One of those individuals was Jack Sprecher, who is well-known throughout the Wisconsin amateur baseball scene as its biggest fan and a tireless advocate for the game. The other was the Casco A's Dan Yagodinski.

While all previous members were selected in recognition for their efforts in establishing and maintaining the league and its member teams, Dan was the Hall's first member selected solely for his talents on the baseball field.

There are few in the history of the Shoreland League that can boast his accomplishments. He is the only four-time winner of the league's Most Valuable Player award, taking home the trophy in 1991, 1993, 1996, and 1998. The 1993 season also saw him win the Batting Title and the league's triple crown - leading the league in batting average, homeruns, and runs batted in. In addition to the individual accolades, Dan also won three Shoreland League titles with the A's in 2002, 2004, and 2005 all as both a player and co-manager of the team with Mark Jandrin.

Dan credits both genetics and geography for his baseball talent. His father, Fred Yagodinski, was the baseball coach at Luxemburg-Casco High School for 32 years and was inducted into the Wisconsin Baseball Coaches Association Hall of Fame in 1996. If having such a font of baseball knowledge in the house wasn't enough, Dan also grew up across from the high school's baseball field with access to the batting cage whenever he wanted.

Speaking about his father's influence, Dan said, “He instilled baseball in me growing up... I was taking batting practice and my dad was hitting me fly balls since I can remember.”

Fred would throw batting practice for Dan from an early age up even until the end of Dan's playing career with the A's when Fred was in his mid-60's. (Fred and Dan at the dedication of Fred Yagodinski Field in 2016.)

As a child, Dan was a fixture at the high school's baseball practices and then played for his father until graduating from Luxemburg-Casco in 1989. His high school career concluded by being named the MVP of the 1989 WBCA All-Star Classic. He then took his talents to UW-Milwaukee where he played NCAA Division 1 baseball for the Panthers and hit four homeruns with a .299 batting average over three seasons.

In 1990, Dan joined the Casco A's, continuing to be teammates with many of his friends he played with in high school. He started his career as a pitcher and infielder before moving to the outfield for the majority of his games with the A's.

During his early career, the Shoreland League was dominated by the Menasha MAC's. The MAC's won four titles over seven years and always seemed to have the A's number. A first round playoff game against the MAC's in 1997 sticks out in Dan's mind, however, as they were finally able to defeat Menasha and knock them out of the playoffs.

Menasha had finished the regular season with the league's best record at 13-1 while Casco didn't even manage to finish above .500 at 6-8. The game would feature a battle between two future Major Leaguers as the A's sent Brad Voyles to the mound and the MAC's had Eric Hinske in their lineup. Behind a dominating performance by Voyles, Casco knocked off the league's top regular season team. They would, however, lose to Kaukauna in the championship.

Throughout his career, Dan was such a feared hitter that teams even had to enlist the umpires to help get him out.

Once, while playing at Howards Grove, he hit two ground rule doubles and a homerun in a game. His next at bat also resulted in him hitting a ball over the outfield fence. However, with some convincing from the Howards Grove manager, the home plate umpire called him out for having a foot outside of the batters box.

“The ball barely got off my bat and I heard the umpire calling me out,” Dan remembers. He's able to chuckle about it now, even though his feelings about it at the time were a little different.

With young children of his own who were starting to get involved in sports themselves, Dan played his last season in 2006. While a growing family and the duties of fatherhood were the impetus for his stepping away, the league's recent switch to wood bats in 2005 was a factor as well.

“I fancied myself a little bit of a power hitter...with the switch to wood bats and you combine that with my age..it was a hit to the ego, to be honest.”

The Yagodinski name has left it's mark on local baseball. The Luxemburg-Casco High School team played their games at Village Park, sharing the field with the A's, until one was built on the school's campus in the late 1990's. In 2016, that field was named “Fred Yagodinski Field” in honor of Dan's father. (Fred Yagodinski throws the first pitch on the newly named Fred Yagodinski Field. He's helped by his son, Dan, while Dan's son, Nathan, stands off to the side. Nathan was the starting pitcher for the game and threw a 2-hit shutout.)

Dan may not have a field named after him but his name is still brought up in baseball conversations.

“I've never played with or seen a player to this day swing so hard,” remembers Jandrin. “He's been retired...how many years and people still talk about him grunting and hitting his back with the bat.”

There is now another generation of Yagodinski's on the baseball field. Dan's two sons, Nathan and Blake, had the love of the game passed down to them from their father and grandfather. Both played baseball at Luxemburg-Casco and Nathan has already played two seasons with the A's. (Dan with his sons Nathan and Blake.)

Looking back, Dan remembers Casco A's games as the place where people from the small community would go on a Friday night. Crowds would be large especially if the A's were welcoming a nearby opponent like Algoma or Kewaunee and there would be good camaraderie between opposing players after the games.

“That was really one of the great things. You could center a lot of your social enjoyment and hang around with a lot of guys with a similar desire to play baseball.”

Unfortunately, due to COVID it was decided not to hold an induction ceremony for Dan during the A's 2020 season and to instead try again in 2021. Whenever that ceremony takes place, it will provide another opportunity for the Casco community and Dan and his teammates to gather.

No doubt there will be memories shared from games that took place at Village Park and on Fred Yagodinski field. There may even be talk of grunting swings and feet being out of the batters box or Brad Voyles striking out 12 MAC's while walking another 12 but still winning the playoff game. No matter what, it will be a Friday night at the baseball field in Casco and what could be better than that?